Today, Marleen Lutters and Kristen Brennand, from Universiteitsmuseum Utrecht will visit us. We will be discussing the topics of Robotics and AI.

Universiteitsmuseum Utrecht, jointly with TivoliVredenburg en Museum Speelklok, will organise a WWWW-familie lecture on Robotics and AI on november 4, in TivoliVredenburg in Utrecht. See link for more info.

This familie event is organised in collaboration with Museum Speelklok. Museum Speelklok will also host a exhibition ‘Robots Love Music’ from September 21 2018 untill March 3, 2019. This exhibition will feature work on soft robotics by our PhD researcher Rob Scharff.

Want to know more about 3D printing, 3D scanning, robotics, smart materials, AR/VR etc.? Want to share an interesting story? Want to chat to researchers working on these topics? Looking for a graduation project on one of these topics? Then come to the MakerLunch!!

Open to students, faculty members, companies and other external parties Find us here!

Coming Wednesday there will be no regular MakerLunch.

We would like to invite you to the graduation presentation of Drim Stokhuijzen on “The Foodprinter of 2020”. This will be held in the Van Der Grintenzaal @ Industrial Design Engineering, from 12:30 – 13:15.

Today at the MakerLunch, Bas van Deursen en Tom Nagel from Ultimaker will join us.

Ultimaker and IDE faculty have a continued collaboration as Ultimakers hosts multiple  master graduation students with projects on 3D printing. Talk to them about interesting new developments and for opportunities regarding graduation projects.

Professor Edward Valstar will be joining the MakerLunch tomorrow. He is professor at Delft University of Technology as well as Leiden University, where he is professor of Orthopaedic Implants and head of the Biomechanics and Imaging Group.

On two consecutive Makerlunches, four Honour students of Industrial Design Engineering will take turns to present results of their honour track assignment related to Designing with Smart Materials. The work was conducted with the research group Emerging Materials of Prof. Kaspar Jansen, who will also be joining the MakerLunch.

They will give a short presentation, and there will be some time to ask questions as well. 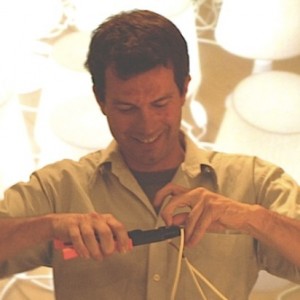 Coming Wednesday, Daniel Saakes will pay us a visit (former PhD and colleague from our faculty). Daniel Saakes is currently assistent professor at myDesignLab at KAIST University in Korea. Join us next Wednesday for a chat with our regular MakerLunch visitor: Bas van Deursen from Ultimaker. Bas is a alumni from Industrial Design Engineering and currently works as a design engineer at Ultimaker working on next generation 3D printers 😉

He will share with us some interesting insights on late stage product development. What happens when you travel to China, to inspect the first batch of components for a new product.

So join us to get insights into the gap between a ‘design-on-paper’, and the reality of actually producing a product.

Today at lunchtime, Mark Mulligan from Harvard University, Graduate School of Design will join us for the maker lunch. Mark Mulligan is Associate Professor in Practice of Architecture.

Mulligan’s research explores the relationship between constructive detail and meaning in architecture; he has taught a variety of studios and courses at Harvard, including a course on modern Japanese architecture, introductory and advanced courses on construction technology, architecture studios, and urban design studios.  Since 2010, he has led a teams of students in producing digital reconstructions and CG animations of major landmarks of 20th century Japanese architecture, including Frank Lloyd Wright’s Imperial Hotel in Tokyo (built 1923, demolished 1967), Kenzo Tange’s 1964 National Olympic Stadium at Yoyogi, and (currently in progress) Junzo Sakakura’s Japan Pavilion for the 1937 Paris World Expo. In winter 2014, he collaborated with FAS Professor Yukio Lippit to organize the exhibition “The Thinking Hand: Tools and Traditions of the Japanese Carpenter” at Harvard University’s Reischauer Institute of Japanese Studies, as part of the RIJS’s 40th Anniversary celebration.

Since this week we have a TV commercial star in our research group! Our colleague Rob Scharff and his soft robotics hand feature in an advertisement by Eneco.

A short moment of fame for the Rob’s soft robotics hand at 1:03 in the movie. And you can also see Rob in the advertisement (with the google logo in the background  in a red shirt ;).

This website uses cookies to improve your experience while you navigate through the website. Out of these, the cookies that are categorized as necessary are stored on your browser as they are essential for the working of basic functionalities of the website. We also use third-party cookies that help us analyze and understand how you use this website. These cookies will be stored in your browser only with your consent. You also have the option to opt-out of these cookies. But opting out of some of these cookies may affect your browsing experience.
Necessary Always Enabled
Necessary cookies are absolutely essential for the website to function properly. This category only includes cookies that ensures basic functionalities and security features of the website. These cookies do not store any personal information.
Non-necessary
Any cookies that may not be particularly necessary for the website to function and is used specifically to collect user personal data via analytics, ads, other embedded contents are termed as non-necessary cookies. It is mandatory to procure user consent prior to running these cookies on your website.
SAVE & ACCEPT